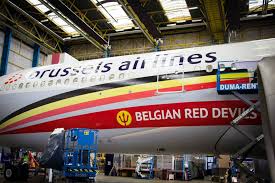 BCO Aviation, the specialist in aviation markings and aircraft film-based decoration was appointed by Brussels Airlines to turn an A330-300 of the fleet in the Belgian National Football Team flags and Red Devils colors specially operated to transport the Belgian team and members of the RBFA (Royal Belgian Football Association) to Brazil at the occasion of the 2014 FIFA World Cup™ last month.

Brussels Airlines already successfully collaborated several times with BCO for multiple aircraft decoration and special livery projects based on adhesive aviation film. The Belgian airline decided to entrust again the Luxemburgish specialist in aviation marking to manage this new decoration project on one of its Airbus A330-300 aircraft. BCO team who collaborated with Brussels Airlines marketing and technical engineering departments were responsible for the aircraft decoration including the project management, production and installation of the adhesive film on the aircraft fuselage.
“Time is very limited when the aircraft is on the ground. Therefore, we needed a trustful partner to complete the work in a very efficient and professional way and within the allocated time-frame. Constraints are huge in the aviation sector, but thanks to the positive experience we have made with BCO on several other aircraft branding projects in 2013 and even earlier, we decided to trust them again for this new exciting project.” says Matthieu Fores, Brand Manager at Brussels Airlines. “The key to quality is efficiency and professionalism. To get a perfect result of the branding on our aircraft, top quality of visuals and full respect of the aviation regulations were required. Thanks to its high level of expertise in aviation BCO has the last couple of years become a key partner for Brussels Airlines.”

BCO expert teams opted for a special aviation micro-perforated film specially dedicated for this type of temporary decoration projects, which was applied on the aircraft fuselage. The installation of the aviation adhesive film on the fleet was performed in Brussels Airlines facilities by BCO decorators’ team. The installation work was completed within 16 hours, allowing the A330-300 to be immediately ready for operation after the decoration. 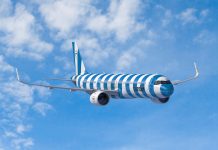 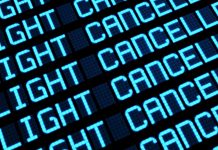 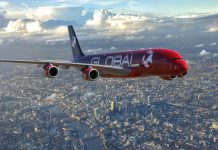